Gym unlocks when you reach level 5. Once reaching level 5, trainers are allowed to enter gyms and be able to choose one out of three teams: Team Instinct, Team Mystic or Team Valor.

Your choice does not really affect the rest of the game, but from now onwards, you will be battling as a representative of this team. So it will be beneficial to join the same team with your friends, and all can work towards the same goal when you are playing the game. You can gain XP for battling in gyms and even stardust and Pokecoins if you manage to defend your gyms.

Gym level will determine the number of Pokémon that it can hold, 1 Pokémon per gym level, up to a maximum of 10 Pokémon for a level 10 gym. You can train at your team’s gym to increase the gym prestige and battle at enemy gym to reduce its prestige. If the gym loses a level, the lowest CP Pokémon in the gym will be removed from the gym first. Bear in mind that each trainer can only deploy one Pokémon in any gym for defence. 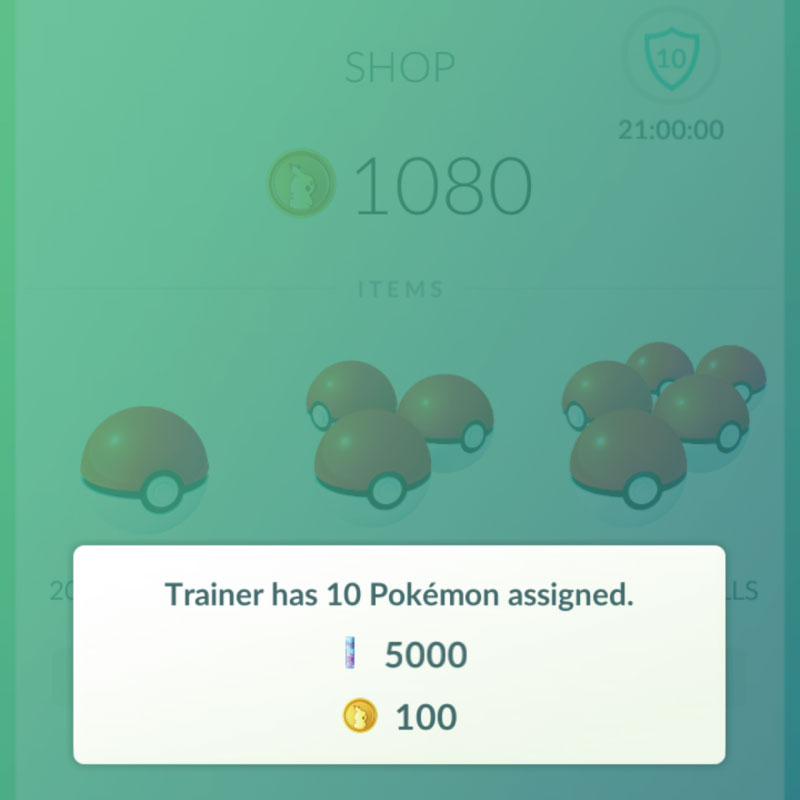 As mentioned earlier, gym not only give you XP but also stardust and Pokecoins if you manage to defend it. You can collect rewards in the Shop menu every 21 hours. In the Shop menu, click on the Shield icon at the top right to claim your reward. For every gym that you are defending, you can get 10 Pokecoins and 500 stardust. You can get reward for up to 10 gyms.

Only Pokémon with full health will be allowed to defend a gym. Once the Pokémon is in the gym defending, you will not be able to use it for battle, evolve or power up until that Pokémon is ejected from the gym from losing gym level. The lowest CP Pokémon will always be ejected first, so it’s better to place a higher CP Pokémon if you want a higher spot in the gym. Trainer who have the highest CP Pokémon in the gym will be the gym leader.

When you attack a friendly gym, you are actually training the gym to increase its Prestige. You can only send one Pokémon to battle in a friendly gym. Make sure that the Pokémon that you send stand a chance of defeating the Pokémon you are training against because if you lose you won’t gain anything.

If you want to slot in a Pokémon in an allied gym that is full, try to select a Pokémon that has lower CP than the defending Pokémon to battle. Using a lower CP Pokémon will increase more Prestige (500 or more Prestige) and grants you more XP from a win.

Prestige gain is capped at

You will reduce the gym Prestige for each Pokémon that you defeat. The gym level will drop as you reduce its Prestige. When the gym reaches 0 Prestige, it will become a neutral gym and anyone can claim it by placing a Pokémon in the gym.

When battling in an enemy gym, your Pokémon could be reduced to 0 HP and faint. When a Pokémon faint, you will need to use a revive in order to be able to use the Pokémon again. In the midst of battle, you can click on the bottom right icon to switch to another Pokémon. Apart from saving Revives, switching to another Pokémon will be beneficial if you are up against a Pokémon that puts you at a disadvantage. For instance taking a Flareon to fight a Vaporeon. You will want to attack with a Pokémon or move that the opponent is weak against.

Defeating a singe Pokémon in an enemy gym will reduce its Prestige by 500 and gives you 50 XP. Defeating all Pokémon in the gym will give you a bonus of 1500 Prestige and 50 XP. So it is worthy to sweep all the Pokémon in one go if you are strong enough or slowly take out the Pokémon one by one if the defending Pokémon is too strong.

Prestige and XP for Attacking an Enemy Gym