This is how damage is calculated in combat. Let us look into the formula in more detail.

Floor() basically rounds a number down, and while Floor()+1 is same as rounding up, the +1 will ensure that the minimum damage of an attack is 1.

This Floor function benefits faster attacks, as the +1 would eventually add up to the damage output. For instance, let’s look at Pikachu.

Power and cooldown are the core of an attack’s damage output. If two Pokémon are equally matched, the actual damage could be quickly estimated by using (½power + 1). For instance, a battle between a Level 15 Flareon and Level 15 Dragonite.

Each Pokémon has a different type and how effective a Pokémon is against another Pokémon during combat can be referred from the effectiveness chart below. 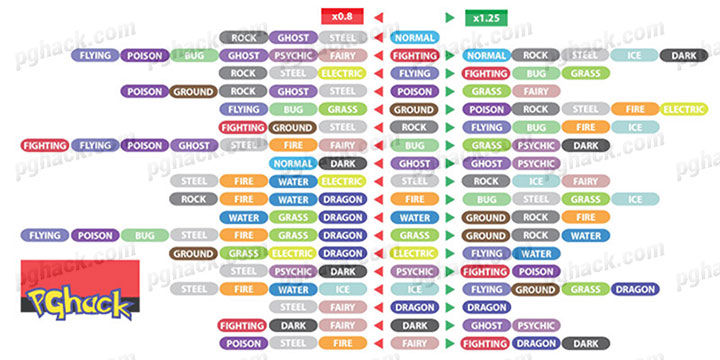 Some Pokémon are dual type. There can be multiple effective bonus if you attack with a type that is super effective against both of the defender’s type.

For instance, Dragonite which is both a Dragon and Flying type is weak against Ice attacks. Thus, Dragonite will receive x1.25×1.25 = x1.5625 extra damage from Ice attacks.

These dual type Pokémon is double weak against certain attack types. When a Pokémon has double weakness against an attack type, the damage will be  increased by x1.25² and will wear down their HP quickly.